What are Fire doors? This type of door assembly is specially designed to stop the fire and smoke for a decided period of time as mentioned in the British Standards 476 Part 22 and Fire Door Guidance British Standard 8214-2008 also called Code of Practice for Fire Doors Assemblies.

There are various constituents in a fire door. It is made up of a solid timber frame with additional fire resistance glass.
But how do we decide what is the correct rating for a fire door? The answer is ‘it depends!
According to the Life Safety Code, the rating required for doors and openings such as a window depends on the hourly requirement of rating and their location in the building. You must know that not all fire barriers are equal; as a door near an exit will have a different requirement than one in a corridor or any hazardous location. This might look complicated at first but the Code of Practice for Fire Door Assemblies has done a great job by putting everything on one table. You have to read each row and column properly for deciding the fire requirement.

Where will you find more info on an existing fire door?
Every door has a permanent legible label given by the Fire doors manufacturer. These labels contain a lot of information like about the manufacturer, fire resistance time, or if it needs additional fire resistance hardware. Details on temperature rise rating or if it is a smoke door assembly or not.

It lets you know about the original construction of that door. Sometimes, frame labels give resistance duration longer than the reality. For such cases, the lower of the two will be the assembly rating. Hardware, such as fire exit hardware, will have a label that is very less thorough.

It lets you know about the original construction of that door. Sometimes, frame labels give resistance duration longer than the reality. For such cases, the lower of the two will be the assembly rating. Hardware, such as fire exit hardware, will have a label that is very less thorough.

How to use the code for fire rating and smoke partition?
Use the section 8.4 of the code, for smoke partition rating. Consider corridor walls in a large residential building which needs a 30 minutes rating; the moment it is determined that the smoke partitions need a fire-resistance rating then one can consult the table. In the given case the door should have 20 minutes of fire-protection rating. It all depends upon the application of the barrier. Generally for a two-hour rating fire barrier one needs a one-and-a-half hour door. Fir barriers that have more than two hour of rating are hardly required by the code except for some occupancy with higher risks.
But one may ask whyI can’t use a one hour door for a one-hour barrier. Well, there is no problem in using it but you add up to the expenses unnecessarily. And the code doesn’t want you to do that! Another reason of this difference between the barrier rating and the door rating is because of the test used to fix them. If you noticed, there are two separate terms i.e. fire protection rating for a door and fire-resistance rating of a fire barrier.
ASTM E119 is a type of a lab test that is used for fire barrier assemblies whereas Standard Test Methods for Fire Tests of Building Construction and Materials lets us determine the fire-protection rating. Comparing these two will be same as comparing apples to oranges. We can’t say that one hour of fire resistance (fire barrier) and one hour of fire protection (fire door) is the same thing.

Where to find the code requirements for fire doors?
National Fire Protection Association (NFPA) 80, Standard for Fire Doors and Other Opening Protectives, is referenced by the International Building Code (IBC), International Fire Code (IFC), NFPA 101, Life Safety Code, and other codes and standards. NFPA 105, Standard for the Installation of Smoke Door Assemblies and Other Opening Protectives, focuses on smoke doors and is also referenced in these publications.The NFPA80 and 105 are referred for very detailed requirements. You can consult a manufacturer’s listing for a product specific situation like for finding out maximum available size of door made by the company.

How to use the door in case of a fire?
To prevent the smoke and flames from spreading, a fire door must remain closed. The intention of using a fire door is simply to protect the exits and give ample amount of time for evacuation.

What is the meaning of Positive Latching and when do you need it?
A Fire door manufacturer will make sure that a fire door has an active latch bolt. This will stop the door from opening up due to the pressure caused, at the time of fire. Active latch bolt is referred to as any spring latch found in a standard lockset. But electromagnetic locks are not positive latches as the locking is done when the electromagnets bond to the steel armatures. In case of an electric strike could let the door to unlock so, these type of strikes light not be used on a fire door.

Is Smoke Door and Fire Door the same? Does a fire door needs smoke gasketing?
NFPA 80 and NFPA 105 do not explicitly mention that a fire door or smoke door needs smoke gasketing. To find about your requirement, check the applicable code like IBC and find out the limitations on air infiltration.
Fire door manufacturer in India make sure that a fire door doubles as a smoke door but vice versa is not true. A smoke door is used to stop the smoke from dispersing in the way of fire escape routes and give a clear and non-toxic route to people; whereas, a fire door helps to stop the spread of flames.
Hope we were able to clear some of the most important queries regarding fire doors. But still, if you feel stuck and if you are looking to install fire doors in your institution call us at
+91 1762-280143 , +91 98142 14344.

We’d love to hear from you!

We’ll help you find the right products and pricing for your business. 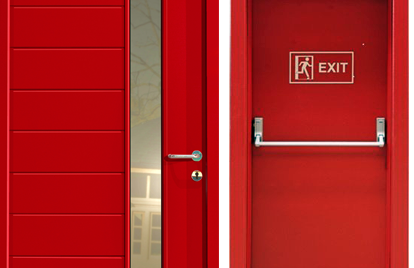 What are Fire Doors?

Everything you must know about Fire Doors/ Emergency Exit door.